Code generation is a very interesting topic. Instead of just writing code you can write code to write code. You can do code generation at compile time (new fancy source generators) and at runtime (expressions, emit IL). Anyway the idea to create methods and classes at runtime sounds like a magic to me. Runtime code generation feature is used quite heavily under the hood of DI frameworks, ORMs, different types of object mappers etc. Now when I have a sufficient understanding of the topic I realized that in the past I had some tasks which could be solved in more efficient and elegant way by using code generation. Unfortunately during those times I knew nothing about it. Searching the internet gave me results with quite high entry threshold and they didn’t give an entire understanding of the feature. Most of examples in articles are quite trivial so it’s still unclear how to apply it in practice. Here as the first step I want to describe a particular problem which could be solved with metaprogramming and then to give an overview of different code generation approaches. There will be a lot of code.

Let’s imagine our application receives a data from some source as an array of strings (for simplicity only string, integer and datetime values are expected in an input array):

I need a generic way to parse this input into the instance of a particular class. This is an interface to create a parser delegate (i.e. it accepts an array of strings as the input and returns an instance of T as the output):

I use ParserOutputAttribute to identify classes used as parser’s output. And I use ArrayIndexAttribute to understand which property corresponds to each of the array elements:

If array element can’t be parsed to the target type then it’s ignored. So as a general idea I don’t want to limit implementation by Data class only. I want to produce a parser delegate for any type with the proper attributes.

First of all I want to write a plain C# code without code generation or reflection at all for a known type:

Quite simple, right? But now I want to generate the same code for an arbitrary type at runtime or compile time. Let’s go!

In the first approach with reflection I’m not going to generate a parser delegate. Instead I’m going to create an instance of the target type and set its properties using reflection API.

It works and it’s quite readable. But it’s slow (check benchmarks section below too). If you want to call this code very often it could be an issue. I want to implement something more sophisticated using real code generation.

From the official documentation:

Expression trees represent code in a tree-like data structure, where each node is an expression, for example, a method call or a binary operation such as x < y. You can compile and run code represented by expression trees.

Expression trees give primitive building blocks like Expression.Call to call a method, Expression.Loop to add some repeating logic etc. Then using these blocks we build a parser delegate as a tree of instructions and finally compile it into the delegate at runtime.

Dotnet compiler transforms your C# code into intermediate language (CIL or just IL) and then dotnet runtime translates IL into machine instructions. For instance, using sharplab.io you can easily check how generated IL will look like: 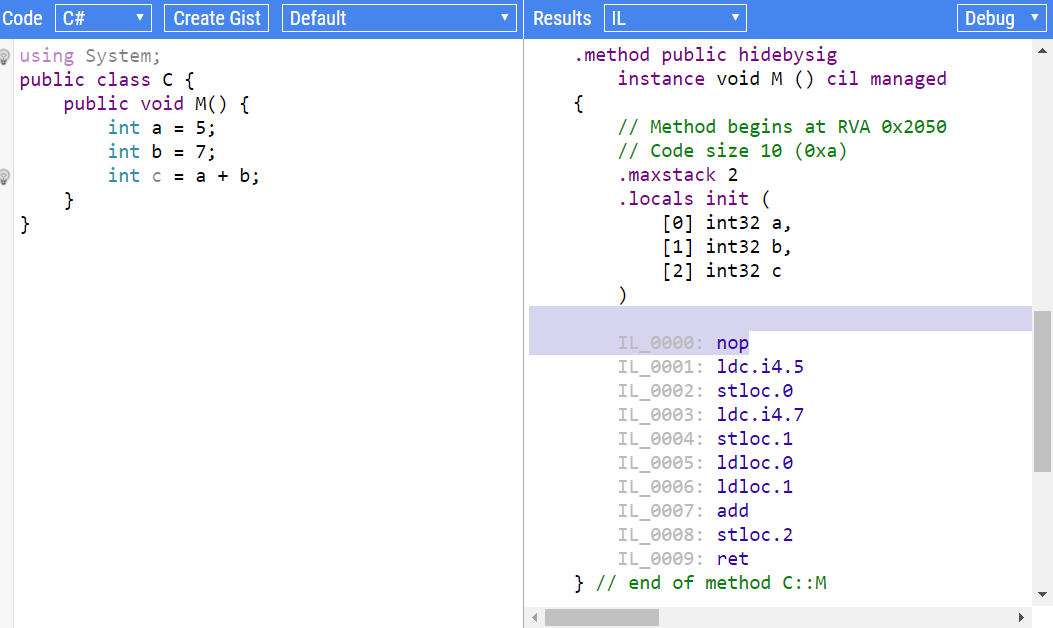 Here we are going to write (“emit”) IL instructions directly and then compile them into the delegate at runtime.

This approach is quite similar to the previous one, but now we use sigil which gives us a syntax sugar and more understandable error messages.

We have implemented three approaches to create a parser delegate: expression tree, emit IL and sigil. In all cases we have the same problem: IParserFactory.GetParser does a hard job (builiding an expression tree or emitting IL and then creating delegate) every time you call it. Solution is quite simple - just cache it:

Now we reuse compiled versions of delegates which is more efficient.

Roslyn is a dotnet compiler platform which doesn’t only compile code but gives an ability to do syntax analysis and to generate code.

Roslyn approach is quite interesting because it gives an ability to write plain C# (as a string though) instead of writing IL instructions or combining expression tree blocks:

Source generator gives a very interesting ability of building parser’s delegate during the compilation step, i.e. in advance. So in that case we don’t have any runtime overhead to build a parser delegate at the first time which is amazing:

All approaches besides direct usage of reflection give results almost identical to manually written C# parser.